I was lucky enough to grow up in Greece and I absolutely LOVE Greek food.  When we lived there we’d head to a gyros stall at the bus station once a month or so for a quick and cheap meal, which they’d wrap up in paper and we’d eat sitting on the edge of the harbour looking out to sea.  Childhood food bliss!

A gyros is typically meat cooked on a spit and then popped into a pita bread with salad, chips and tzatziki.  Since going veggie, then vegan I’ve occasionally had cravings for a cruelty-free version and here it is….

This is definitely more of an assembly job than an actual recipe as such.

The pita breads that you can buy in most UK supermarkets are nothing like the ones you get in Greece. The closest I could find were actually Italian flatbreads by Crosta & Mollica, available from Waitrose.  You just pop them in a hot dry frying pan for 1 minute each side before using. 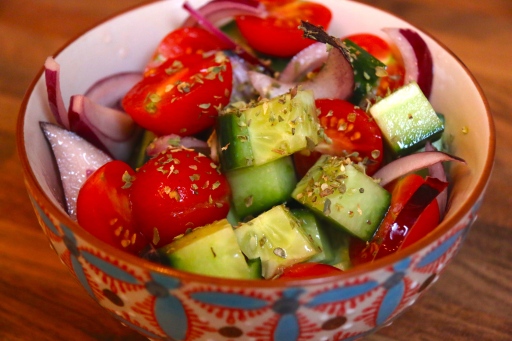 I made a simple salad with cucumber, cherry vine tomatoes and red onions (all organic) drizzled with olive oil and sprinkled with dried oregano.

I made the tzatziki using soya yoghurt, grated cucumber, sliced garlic and a pinch of salt.  The yoghurt I tend to use for cooking is one by Sojade, made in Brittany and sold by Abel and Cole.  It’s GM-free, organic and is one of the only ones I’ve found in the UK that’s unsweetened and so is ideal for using in savoury recipes. 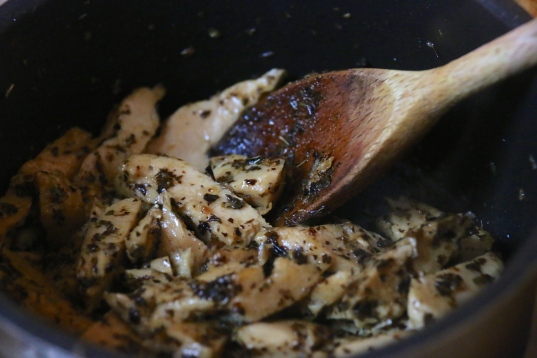 The meat-alternative I used is one that I bought at Vegfest recently.  It’s made by an Italian company called Muscolo di Grano, which they sell online and is scarily realistic!  I marinated it first in olive oil, dried oregano, paprika, garlic, lemon juice, black pepper and salt, which I then just shallow-fried in a pan. 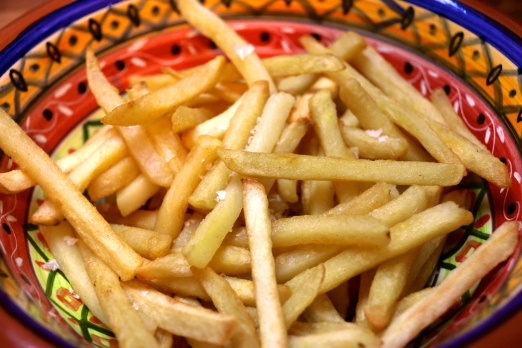 Chips – if you’re feeling that you have the time and energy then by all means make your own but this time I cheated and used oven chips.

Wrap all the ingredients up in the flatbread, sit back, enjoy and dream of sitting by the Med on a balmy Greek summer’s evening….